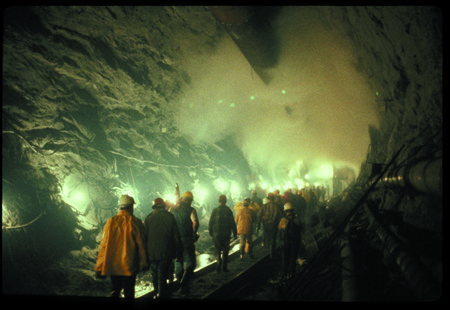 The stories of sandhogs, engineers, geologists, mayors, and upstaters whose towns were flooded to bring clean water to 9 million New Yorkers. A multi-media Obie Award-winning play that has toured the United States and Europe. A five year creative placemaking project with a memorial, exhibits, video installations, story circles, onsite performances, and civic dialogues about the largest public works projects in the Western Hemisphere. 60 years in the making, 25 men killed, as deep in the ground as the Chrysler Building is high.

Marty Pottenger was the performer, writer and project director for City Water Tunnel #3, a multi-media Obie Award-winning play and five-year community art project. City Water Tunnel #3 is about the building of the largest non-defense public works project in the Western Hemisphere. The tunnel’s construction began in 1970 and is scheduled for completion in 2025. City Water Tunnel #3 was created in partnership with Local 147 of the Tunnelworker’s Union and NYC’s largest city agency, the Dept. of Environmental Protection, which is in charge of the tunnel’s design, planning, financing & construction.

“Marty Pottenger establishes a city water delivery system as the backdrop for an often lyrical show that speaks with intimate knowledge and yes, even love, about holes in the ground and the people who drill them. …The approach is a blend of Studs Terkel, Anna Deavere Smith and Pete Seeger.” – Peter Marks, The New York Times

The play was produced by Dance Theater Workshop and Dancing in the Streets in 1996 and by The Working Theater and Art At Work in 1998. The show premiered at Dance Theater Workshop and HERE Arts Center (NYC) in 1996, then toured to the UK, Italy, Yugoslavia, Sweden, and across the US. The show was directed by Marty Pottenger and music for the production was composed by Steve Elson.

You can learn more about the creation of City Water Tunnel #3 by reading this article by Marty Pottenger, which ran originally in High Performance Magazine.

You can watch the entire performance below.

In addition to the play, the City Water Tunnel #3 Project included: